I Learned to Face My Grief

Alan Pedersen, the new executive director of The Compassionate Friends and featured in my second book as a terrific composer and singer at many national conferences, offers his view to Everyday Health as a contributor, of how he faced his grief after the death of his daughter. He hopes this story is read and shared with many others. Here is a summary of what he said in his own words.

On August 15, 2001, I found out from a friend that my 18-year-old daughter Ashley had been killed in an automobile accident. Little did I know that this one single moment in time would become the demarcation point in my life. Time just stopped, I felt frozen and in disbelief. I was paralyzed and in shock.

Somehow I stumbled through the fog and within a few days, we gathered together family, friends, music and food for what we were calling a celebration of Ashley’s life. I spoke with calm and clarity at Ashley’s service and spent hours hugging and comforting those who attended. Shock is an amazing anesthetic when you are in deep and early grief as it allows you to function. People commented on how strong I was that day. Little did they know that just a few months later, I would become nearly incapacitated by the trauma of my grief.

Shock gave way to the reality of all that I was facing. Grief wore me down until I became a shell of the man I once was. My mind was broken, leaving it scattered and unable to focus. My heart was broken because it hurt so badly I could barely breathe. Grief broke my spirit because it made me question God and anything good in this life. Grief broke my body by zapping it of its energy and leaving me with aches and pains.
Well-meaning family and friends were of little help as I spiraled deeper into the darkest days of my grief. I began to choose isolation over confrontation with those who would marginalize my struggle by suggesting that I take comfort in the fact that God has another angel or that Ashley is in a better place. I began to wonder if I was crazy.

Like most people, I had very little understanding at that time about what grief is, and the real and devastating impact it can have on those of us who are thrust into its path. Many of us do not know what we can do to help ourselves or others when a loved one dies or when we face the grief that comes from a divorce or other losses, such as a job, mobility, health, or our independence. My inability to cope caused me to reach out and seek support.

I first reached out to my local chapter of Compassionate Friends. The first monthly meeting I attended helped so much. I met others walking this same journey who validated my feelings and who understood my pain. It was there when I learned that I did not have to walk this journey alone and where I found the hope to believe that I could survive. My group of new compassionate friends became my trusted family who were willing to walk with me and hurt with me for a long as I would need.

I also sought support from a 12-week grief education program. It was here that I learned what grief really is, what it does to our lives, and how it affects us mentally, emotionally, physically and spiritually. Ashley’s death has left me with much unfinished emotional business, and this program helped me to process my pain in constructive ways.

My grief work was hard work, but it began paying off as I was able to emerge from the darkness a stronger person with a clear focus on helping others. Grief has been a transformational teacher. Grief taught me to live in the moment, to value each friendship and relationship, to cherish the gift I am given each day to love and to be loved. Grief taught me to honor the love I will always have for Ashley by living my life.

The Compassionate Friends Conference will be held this coming week, July 10-13. Alan and all the people associated with the conference hope that you can attend in Chicago and learn how to move on with your life after the death of your child.
Posted by Sandy Fox at 6:00 AM 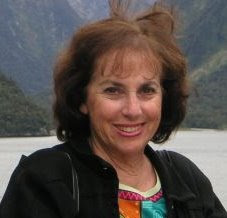 Sandy Fox
My latest book "Creating a New Normal...After the Death of a Child," is now available for purchase through Barnes and Noble.com, Amazon.com, Centering.org, iUniverse.com or it can be ordered at any local bookstore. It has more than 80 articles on coping techniques to help the bereaved parent. In addition, there is a huge resource section and 10 inspirational stories. The book is an award-winning finalist in the Health/Death and Dying category of the "Best Books 2010" awards, sponsored by USA Book News, a finalist in the self-help category of the 2011 Next Generation Indie Book Award, a finalist in the self-help category of a contest sponsored by ForeWord Reviews, and a finalist in the Royal Dragonfly Book Awards. My first book is "I Have No Intention of Saying Good-bye," where parents tell their inspirational stories and how they survived the loss of their child. With this blog I hope to help those who need it the most by posting helpful information for parents,family members,friends and therapists.

Sandy's blog around the world

Link to my web page and info on my book